BMX Cologne 2014 – The ladies are becoming an established part.

From the 18th to 20th of July 2014, the Jugend park in Cologne was once again a meeting and exchange point for female BMX riders from all over the world. This weekend marked the 30th anniversary of an international field of riders that had been invited here to compete in a large BMX contest against each other. The traditional BMX event took place this year for the first time with a slightly tapered look and with a new name. BMX Cologne, formerly known as the BMX Masters or BMX Worlds, wasn’t just presented with a new name, but also with a slightly modified concept. The disciplines Vert and Park/Street – all following the trend of the X Games – vanished and were replaced with a Bowl, the so-called ‘Superbowl‘. Though Dirt and Flatland – the mother and the father of all disciplines ­– remained; as well as the offering to the ladies of the scene a platform. So during the weekend female riders from all over the world came together in order to compete in Flatland and Super bowl. The field of female contest participants significantly thinned out compared to previous years. Vanessa Gerner, a well-known contestant for the past six years, even went as far as to speak of a looming regression in the female participation in the contest circus, although she, as well as some other excellent female riders, had just no interest in bowl-riding. Even the leading lady of past years, Camila Harambour, this time preferred instead to visit the ‘Daniel Dehrs Action Sports Complex’ (DDASC) in the United States, the seemingly new Eldorado for park-riders.

This year, the straight finals of the girl’s class were again held on Sunday morning. While the sky, after two very hot contest days, was initially clouded, the sun broke no later than just before the beginning of the Super bowl contest for the girls. That morning five ladies dared to face the new discipline. Lara Lessmann, Rebecca Berg, Shanice Silva Cruz, Analia Zacarias and the youngest participant, Luzie Ronkholz, came to battle for the freestyle crown in the Super bowl. Sadly, Katherine Dias, who had traveled just for the BMX Cologne event from Venezuela, was not able to participate due to a collision in practice on Friday with another rider, which resulted in a concussion, including an overnight stay for observation in a local hospital. Therefore she could only participate from the stands on Sunday as a supporter for the girls.

Lara, who placed third the previous year, completed the contest this time as the victor. You could clearly see in her riding that she had fun riding in the bowl and the associated challenge to demonstrate her tricks, displaying a repertoire of air and transfer variations. Her beautiful flowing style that already began to emerge in 2013 was more than evident. She used the entire bowl, including its integrated Braun-spine and showed the crowd, among other awesome tricks, some one foot can-can airs and no-foot can-can transfers over the hips as well as a bar spin air and a truck on the table. The queen of lip tricks – Rebecca Berg – was certainly this year’s biggest surprise. Although at first skeptical herself about the new arena, she was a convincing competitor, displaying her program of lip-tricks which included tail-taps to abubacca to a pedal-feeble to 50/50 stall as well as being able to show her excellent bowl-riding skills. She managed like none of the other ladies to build up pressure and speed by carving around the entire bowl, and finally combined both qualities with a successful manual over the entire table around the extension. In the end she placed third. Shanice Silva Cruz from the Netherlands picked up the silver medal. Basically, in order to be a challenger in a bowl contest, one needs varied lines ridden with a certain calmness in order to maintain flow as well as speed. Unfortunately, these things were slightly missing from the comfort zone of the Dutch girl. Instead she used the design of the bowl more like a mini-ramp and fired out, whenever she could, table- and x-up airs as well as some special tricks on the table – including a backflip attempt. Nonetheless, she was able to place second by once again writing contest history here in Cologne when she landed an awesome flair. The two remaining places went to Analia Zacarias from Argentina and to the local hero Luzie Ronkholz. While Analia, who was the only rider in that field, transferred the volcano-like extension of the spine, both regular and opposite, Luzie convinced the crowd with some nice air variations (one handed, tire-grab, E.T.). And both used, as most of the participating ladies, the table of the bowl for various fly-out tricks.

After the finals for the girls Super bowl came the Flatland girls class. It was finally ​​possible to get the chance to watch these ladies in this supreme discipline concerning wheel control and creativity. At first, it did not seem that the Flatland Finals for the girls would even take place due to a possible insufficient number of participants and it even temporarily disappeared from the event timetable. But in the end, with a little help from bowl-rider Shanice Silva Cruz, the required number of three starters for the contest was met and the contest was back in the program. The flatland event had an extraordinary atmosphere to it and the small but mighty contingent of ladies made it a real spectacle. Each participant was loudly supported by the crowd. However, it was especially the successful combos of Irina Sadovnik from Austria which resulted in great enthusiasm and wonder from the crowd and Irina secured a first-place finish.

At the end of the weekend basically once again everyone agreed that it was a successful event in a cheerful atmosphere, despite that fact that the situation with the grandstand at the Bowl event, which seemed like something was missing regarding the relaxation and openness enjoyed at previous Jugendpark events. The next BMX Cologne is surely eagerly awaited by all, and definitely by and for the ladies as well. Regardless of whether the organizer continues the trend and retains the concept of a bowl, the contest has shown that the female riders of the scene have some very good bowl skills and that there is no need to shy away from the associated new challenges. Every single participant gave an excellent performance and it would be nice if more women would find pleasure in bowl-riding, so that next year hopefully more female riders will participate. However, it would then be necessary to offer the girls at least 1 to 2 hours of training time on Thursday at the open practice, because a bowl requires considerable more time to get to know compared to an ordinary park as it takes more time and hard work to find good and useful lines. Otherwise the riding tends to be just like park-riding, but in a bowl and not a park. 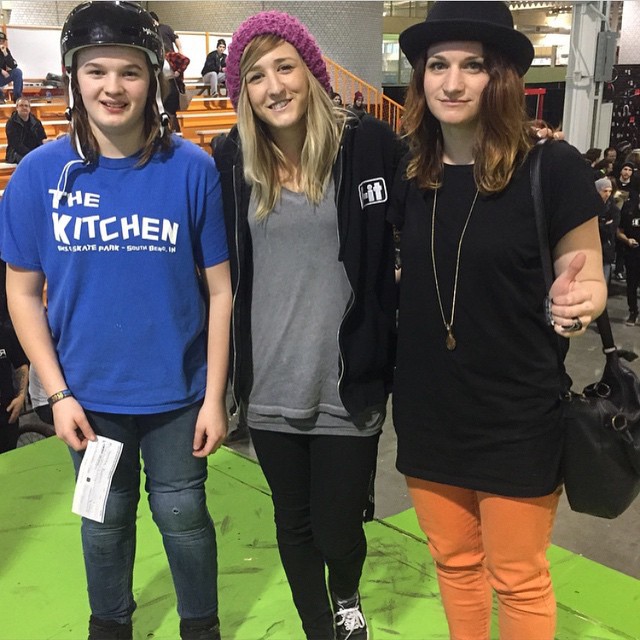